Lanterns are a big part of the mid-autumn celebrations (picture by David Emrich for Unsplash).

Today, my Google Doodle honours the Mid-Autumn Festival celebrated throughout parts of East Asia, which is also known as the Moon Festival (or Tết Trung Thu, here in Vietnam).

Traditionally, it was the celebration and feast to bless autumn’s harvest. (It’s still way too hot to feel like autumn in my books, but apparently that’s the season we’re in!) Today, the Mid-Autumn Moon Festival the most significant one after the Vietnamese New Year, and it takes place when the moon’s the brightest in the year.

The build-up to today, the official day of the Moon Fest, has been thrilling, with the sounds of drums and cymbals going at night as troupes of dancers rehearse their Lion Dances. The dance is believed to drive out bad luck and bring good fortune. Toy shops are festooned with pretty star-shaped lanterns and fluffy dragon, unicorn and lion heads.

Apparently, “the Mid-autumn festival activities were cast on the shell of Ngoc Lu bronze drums. The Vietnamese bronze drums were used as the significant symbols for power and wealth throughout many generations of the ancient Viet tribes dating back to the Bronze Age in Southeast Asia”.

The festival is known as the children’s festival as farm workers would reconnect with their little ones in the middle of the long harvest season. Ever since, it has been a time for family reunions and delighting kids with things like new clothes, colourful lantern marches, and lion and dragon dances.

It’s been great being a teacher, as I’ve gotten closer to celebrations than I would’ve if I’d come as a solo woman traveller or digital nomad. We had a Lion Dance crew come perform for my class of 6-year-olds last week, and just this morning I was woken with a BLAST when dancers and drummers literally used our front doorstep as the stage for performing for the kindergarten opposite our house.

Our landlady observes all the Vietnamese Buddhist rituals, coming to clean and pray twice a month on the moon’s auspicious days. As she swept this morning, she told us of her childhood, when the family would gather to gaze at the moon at midnight. She told us the legend of how the man (and his tree, as you can see the black spot [‘tree’] on it on this day) came to be there, up so high.

Tonight I shall gaze at that man in the moon and ask him a question or two. (Hopefully, I’ll find a mooncake to nibble and some cassia wine to sip.)

For now, here are a couple shots from the Lion Dances seen so far… 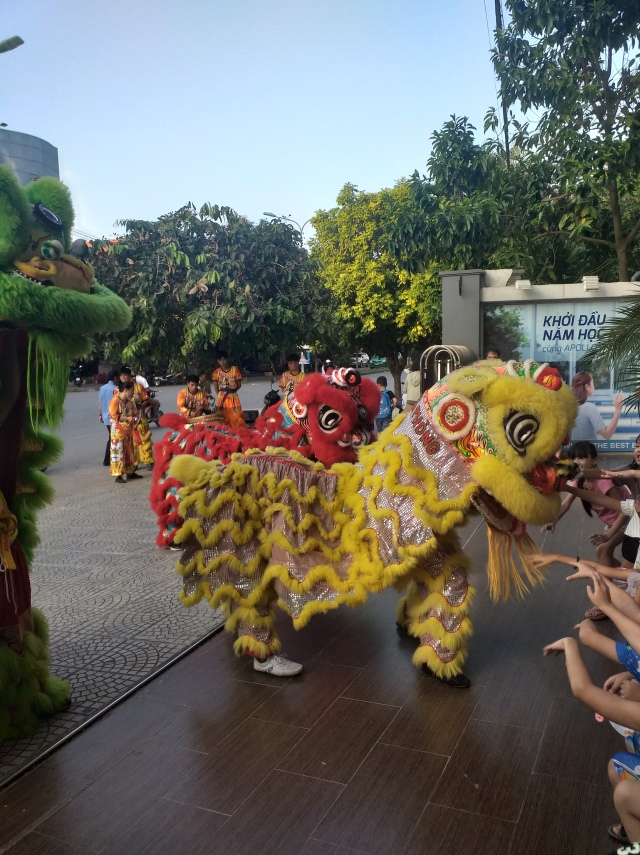 The troupe outside our language centre, with my little ones reaching out to touch their fluffy manes.

Taken from my living room: Dancers perform for the kindy kids opposite.

September is great month for readers wanting the latest must-reads, as it’s when publishers often release hot new titles. This year, some big names have come out with stories I, for one, can’t wait to read. Here are my top suggestions…

The author on the cover of TIME.

THE TESTAMENTS, by Margaret Atwood (Chatto and Windus)

Thanks to the TV series, this sequel to The Handmaid’s Tale is undoubtedly the most anticipated of the lot. The Booker-prize shortlisted sequel picks up 15 years after the 1985 original, with a change in narration.

As O, The Oprah Magazine’s Leigh Haber explains: “While The Handmaid’s Tale is told entirely from Offred’s point of view, its follow-up, The Testaments, has three different narrators, none of them Offred. We are back in Gilead again, where Aunt Lydia seems to have amassed even more power. By now, Lydia has a lot of dirt on the commanders, and she isn’t afraid to use it against them to put them in check or to get something she needs. Because she is a narrator, we get a certain insight into her motivations and thought processes—or so we think: she’s not a very reliable narrator, so be forewarned.”

You can read an exclusive extract here.

OUT OF DARKNESS, SHINING LIGHT, by Petina Gappah (Scribner)

Zimbabwe’s most well-known contemporary writer has a new novel out, set in nineteenth-century Africa. It tells of the trek to carry Scottish explorer Dr David Livingstone’s body from Zambia to the coast, and it’s narrated by Halima, a young slave woman, and a former slave named Jacob.

Should be a goodie.

Praise for the novel…

THE WATER DANCER, by Ta-Nehisi Coates (One World)

Somewhat unsurprisingly, the first full-length novel from the journalist, author and comic-book writer who’s outspoken on the issue of reparations for slavery is a story about slavery and how it tragically separated families. The fiction debut tells of Hiram Walker, a slave born on a Virginia plantation who becomes part of the underground movement to end slavery.

The author photographed for VANITY FAIR.

Publisher’s Weekly say that with this book, “In prose that sings and imagination that soars, Coates further cements himself as one of this generation’s most important writers, tackling one of America’s oldest and darkest periods with grace and inventiveness. This is bold, dazzling, and not to be missed”.

The award-winning novelist, essayist and bookstore owner made Time’s 2012 100 Most Influential People in the World list, and has featured on Oprah’s Super Soul Sunday.

Her publisher’s describe her new release as “a richly moving story that explores the indelible bond between two siblings, the house of their childhood, and a past that will not let them go”.

I love an intergenerational story featuring a house as a kind of character, and would buy this book for the enigmatic, artistic title-and-cover combo alone.

THE WORLD THAT WE KNEW, by Alice Hoffman (Simon & Schuster)

From the prolific author of The Dovekeepers, among others, comes a Jewish historical fiction tale about three women in Europe during WW2.

(You can check out the book trailer here.)

Here’s praise from fellow author Elizabeth Strout, Pulitzer Prize-winning author of Olive Kitteridge: “Oh, what a book this is! Hoffman’s exploration of the world of good and evil, and the constant contest between them, is unflinching; and the humanity she brings to us—it is a glorious experience. The book builds and builds, as she weaves together, seamlessly, the stories of people in the most desperate of circumstances—and then it delivers with a tremendous punch. It opens up the world, the universe, in a way that it absolutely unique. By the end you may be weeping.”

The Irish-Canadian author of the brilliantly executed Room, which was made into a film starring Brie Larson, is finally releasing a new book, which is about a retired New York professor and his great-nephew who go to the French Riviera to unearth the wartime secrets of the professor’s mother.

The London Free Press says: “Donoghue fans won’t be disappointed as the author of 2010’s best-selling chronicle, Room, pens another page-turner. In Akin, kinship itself, in all its intriguing possibilities, is viewed through the forced pairing of an 80-year-old widower and his 11-year-old grand-nephew and through the fraught events of a week-long trip to the south of France … Although Donoghue’s lively tale has many attractions, its most appealing is the repartee between uncle and nephew, crisp, peevish exchanges which underscore the gulfs which exist between generations, gulfs which cannot be bridged easily. Michael is technologically savvy, while Noah is a novice. Noah constantly corrects Michael’s grammar, but the boy, who addresses his uncle as ‘dude,’ refuses to rise to the bait”.

AN ORCHESTRA OF MINORITIES, by Chigozie Obioma (Hachette, Little Brown)

This one’s actually been out a few months, but it’s been shortlisted for the 2019 Booker Prize, which will be awarded on the 14th of October, so there’s still a lot of buzz about it.

It’s a love story; a kind of retelling of Homer’s Odyssey that’s set between Nigeria and Cyprus and is partly based on a true story. What sounds fascinating is that the story’s told from the perspective of a person’s animating life-force – referred to as “chi” in Igbo cosmology.

What inspired the story? The scam artists who lure desperate African students to universities in Cyprus, taking their money, with unmet promises of entry into Europe.

As The Guardian explains:

“The impetus to write the novel came out of what happened to Obioma’s friend, Jay, a Nigerian man he met in the first days of starting college. Jay had been duped by the middle men both into thinking the university in Cyprus would be a springboard into Europe, and that his degree would enable him to make lots of money. Instead, he confronted the reality that not only had most of the funds he’d handed over to fixers been embezzled, but that he was now stuck in northern Cyprus, where there were no jobs and where his status as a Nigerian immigrant made him widely despised. After a heavy bout of drinking, Jay was found dead at the bottom of a lift shaft, where he was assumed to have fallen accidentally.”

“The impulse to write in the first instance may come from a place of optimism – Obioma says that he was partly motivated by a desire to salvage Jay’s death from meaninglessness – but the bottom line remains that, whether one construes the larger forces to be spiritual or political, Jay, and so many other victims of seemingly random deaths, “didn’t do anything to deserve that fate” [Obioma’s words]. Illuminating that fact honours the author’s friend as it powers his fiction.”

This author’s debut, The Tiger’s Wife − about folklore, family and feuds in a story that mythologised Yugoslavia’s history − dazzled me back when it won the Orange Prize back in 2011, when the Serbian-American writer was but 25.

She’s finally released this new offering; an American Western set in 1893 that the blurb describes as follows:

Nora is an unflinching frontierswoman awaiting the return of the men in her life – her husband who has gone in search of water for the parched household, and her elder sons who have vanished after an explosive argument.

Nora is biding her time with her youngest son, who is convinced that a mysterious beast is stalking the land around their home, and her husband’s seventeen-year-old cousin, who communes with spirits.

Lurie is a former outlaw and a man haunted by ghosts. He sees lost souls who want something from him, and he finds reprieve from their longing in an unexpected relationship that inspires a momentous expedition across the West.

Do you have any new book releases to recommend? What have I left off?
Do let me know…