Home for the holidays, I finally got to eat at Rustica Rib House and Restaurant, a firm favourite with my twin sister’s family.

Situated on the Kimiad Golf Course, Moreleta Park, going to Rustica separates you from Pretoria’s sprawling suburbia for a bit as you look over the golf green. Agapanthas greet you as you arrive (as my mom says, “What would a South African garden be without some?”), as does this impressive bougainvillea bush.

We spotted a super-shiny Ferrari in the parking lot, and SA Olympic swimmer Roland Schoeman was leaving with his model girlfriend Rachel Marie Mortenson as we arrived, so this is clearly The Spot.

In addition to the resident strays (an oxymoron this cat-lover appreciates), you may spot monkeys or blesbok as you dine. And kids are free to run on the lawn or jump on the jumping castle.

On the menu, the ribs, steaks and Portuguese chicken are popular. I had a seafood broth – the New Orleans, made with Chorizo sausage, prawns and calamari. YUM!

Maybe it was seeing the bridal party as we arrived and stepping on their scattered rose confetti, or spying the couple sneaking a kiss under the trees away from their picnic party, but today’s visit to the botanical gardens near Roodepoort stirred a sense of romance in my soul.

It seems fitting that the gardens are named after the late anti-apartheid activist Walter Sisulu, as the romance he shared with his wife, Albertina, is the stuff of legends. (Learn more about it here.) I couldn’t help but think of the iconic couple when walking past the “dancing trees” – two trees that have grown beautifully entwined…

Situated about 30km from the Joburg CBD, the Walter Sisulu National Botanical Gardens is one eight national botanic gardens in South Africa. It’s apparently been a popular picnic spot since the Gold Rush of the 1800s, and so it remains: the park has been voted the best place to get back to nature in Gauteng for nine years in a row.

There is grassland and savanna, a cycad garden, a bird hide, a restaurant and waterfall. You can also learn a bit about plants in the educational section, or brush up on the geology of the area on the JCI Geological Trail.

But if it’s romance you’re after, the shady kloofs and bubbling streams will be more to your liking. And with over 220 bird species spotted in the area, you’re guaranteed a soothing chirruping soundtrack to accompany your tranquil walk or picnic. Try spot the breeding pair of Verreaux’s (black) eagles, which nest above the gardens’ dramatic waterfall. 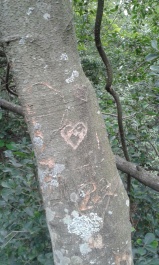 The absence of litter, thanks to the park’s “take out what you take in” policy, means you can expect a clean, more natural experience, which makes a great alternative to lunch out at one of Joburg’s many malls.

There is also a Facebook group for the gardens. 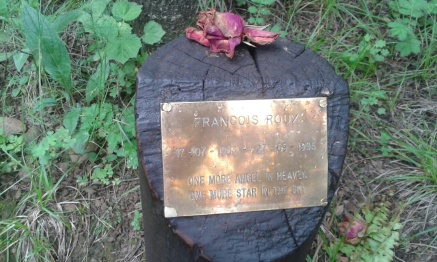 Evidence of storge – “family love”, one of the four types of love the Ancient Greeks identified – in this memorial plaque for a son lost too soon.

Eggs, the human boy raised by the kind-but-misunderstood boxtrolls.

The fantasy-comedy about trash-collecting trolls who hide beneath the fictional 18th-century setting of Cheesebridge, based on the Alan Snow book Here Be Monsters!, is one of those films adults will enjoy as much as children. Why?

The book the film was based on is quite the doorstop.

1. The awesome 3D stop-motion animation
I only realised the steampunk-style animation was done using stop-motion when the girl character, Winnie – the daughter of the mayor of Cheesebridge, Lord Portley-Rind – appeared on the scene and I saw her clothes had a textural, hand-crafted quality, more “real” than animated. Not since Minnie Mouse have I envied a “cartoon” character’s shoes so – those lace-up boots!

The costume designer, Deborah Cook, who also worked on Fantastic Mr. Fox and Corpse Bride, spoke on the challenges of designing outfits for such tiny characters here. (It’s worth looking at for the adorable mini rail of actors’ costumes alone.)

2. Its spookiness and humour that darkly delights
A grimy British look and feel defines the animation: It’s all bunions and skew teeth and cobblestones and vintage winklepickers. Indeed, if your kids are on the sensitive side, getting beyond the Victorian spookiness of the opening section may be a challenge. (But, as author Neil Gaiman explains here, scary stories are always worth it.)

The macabre element that runs through the film will delight adults though, as will its commentary on class aspirations, and the ludicrousness of social mores and manners.

(The film’s baddie, Archibald Snatcher, who looks like an ageing rock star, wants to be part of the exclusive White Hat group of cheese connoisseurs, despite having a cheese allergy so severe, he blows up hideously every time he touches the stuff.)

3. The “aw, shucks” moral of the story
The boxtrolls of the title are shy creatures, believed to be monsters, who live their lives in fear and hiding. But the story’s message – that you are enough, regardless of class, and that you should show up and stand up for yourself – will have the audience cheering aloud at the film’s rousing, rowdy climax.

P.S. Be sure to stay till the end credits, when the stop-motion set is revealed in all its intricate detail.

A guided walk I took through Newlands Forest the other day, to identify indigenous Afromontane tree species, turned out to be uber interesting.

Did you know, for instance, that ‘Oom’ Jan Van Riebeek, the Dutch ‘founder’ of Cape Town, actually lived in Bishop’s Court, not the Castle, as widely believed? That the well-to-do Constantia moms fight with the council to remove bat poop, rich in seeds from the Outeniqua yellowood tree, from their crisp-white walls? Or that the iris was named after the Greek goddess of the rainbow?

Settler history, class gossip and Greek mythology aside, I also learnt a few things about local plants, such as: If there’s one indigenous tree you should plant in your Cape garden above all others, make it the wild peach.

As our guide Mark Hawthorne (great surname for a tree guide), from Table Mountain Treks and Tours, explained: “With Wild Peach in the garden, you create a whole ecosystem.”

A Peachy World
Also known as Kiggelaria Africana, umKokoko (Xhosa), Lekgatsi (South Sotho), Monepenepe (North Sotho), wildeperske (Afrikaans), uMunwe (Zulu) and Muphatavhafu (Venda), the wild peach is a natural pioneer of the Afromontane forest. If an area is cleared of indigenous vegetation, it’ll likely be the first to return, paving the way for regeneration. They grow quickly, too, and are evergreen.

The wild peach attracts loads of birds and butterflies. On its leaves, we found these creepy critters – the caterpillar larvae of the Garden Acrea (Acraea horta) butterly that pollinates fynbos and has been so prolific in Cape Town of late.

In late October, the Oranjezicht City Farm posted on FB about the buttlerflies being all over their wild onion and trees in late October, getting a lot of responses from others who’d noticed a lot of them flitting round the city this spring.

In nature, things that are poisonous or dangerous often look that way. This punky fella is pumped full of the cyanide that laces the leaves of the wild peach. This is why the caterpillar is not popular snack for birds, apart from Klaas’s Cuckoos – “they’re the only birds that can stomach it,” said Mark.

Another bird that loves the wild peach is the sweet-looking Cape white-eye. And if you watch your tree closely, you may even spot the shy boomslang waiting to prey on it… The tree that brings wildlife to your back garden will last for years, and in its old age it will develop this sturdy-looking ‘elephant foot’.

Our guided walk ended at the ruins of Paradise (Paradys), the former master woodcutter’s house that later became the holiday house for Lady Anne Barnard, the British socialite, artist and travel writer who lived in the Cape, on the property that is now the Vineyard hotel, with her husband Andrew Barnard from 1797 to 1802.

At varsity I was lucky enough to be taught by Professor Margaret Lenta, one of the editors of The Cape Diaries of Lady Anne Barnard, which documented how the Cape’s ‘First Lady’ overcame challenges to keep living in the style she was accustomed to (I recall the #ColonialProblem of keeping meat fresh for dinner guests in the African heat).

If you fantasise about time travel like I do, you can read some of her writing here and here. SA writer Anjie Krog also became fascinated by voyeuristic traveller back in the 1980s and published a volume of poems titled Lady Anne.

The site of the ruins of Lady Anne Barnard’s home, Paradise. Now overgrown, it once would have had epic views. To the left is a large poplar tree. They were brought to the Cape as a windbreak for the oaks.

Here is Lady Anne Barnard’s drawing of Paradise back in its day.

Some other things I saw… 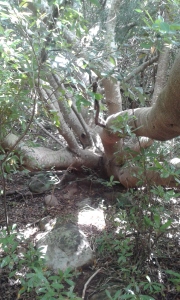 The wild almond tree was the first indigenous tree to be propagated by the Dutch. Apparently one of Jan Van Riebeeck’s favourite, it was used to form a dense boundary fence to stop the Khoikhoi from grazing their livestock in Dutch areas and is so seen by some as one of the earliest examples of apartheid. While we were here, we heard a fiery-necked nightjar call. “That’s one for the books”, said Mark, who has never heard one call during the day in his 30-odd years of working in conservation. Eery. 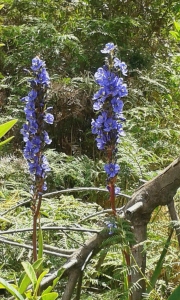 Our guide, Mark, in front of a camphor bush, which attracts nesting birds. A second later, a crow and a Jackal Buzzard flew by. 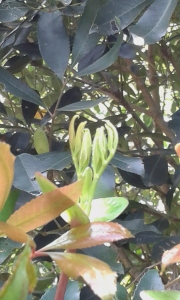 The ‘praying hands’ (baby leaves) of the Rooiels (Cunonia capensis/Butterspoon), usually found along river banks and in waterfall ravines. The ‘spoons’ beneath them secrete a kind of sunscreen to protect the baby leaves from UV rays. 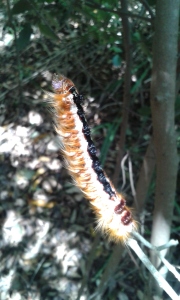 The gorgeous caterpillar of the Cape Lappett moth looks good enough to stroke. (Luckily I learned that lesson in nursery school.)